The Triangle Below Canal Street 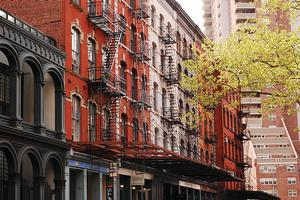 At first glance, Tribeca with its many industrial type buildings appears to be less residential than it really is. However, once people become familiar with the area, they come to love it for the “real” neighborhood that it is.

The Triangle Below Canal Street (TriBeCa) began to gain its reputation as a residential neighborhood in the 1970s, when artists arrived in search of less expensive accommodations and studio space. The area’s unique industrial-age architecture of lofts, warehouses and market spaces—and the lifestyle of its residents—was a major influence on the popularity of “loft living” in the 1980s.

TriBeCa has since then become a sought-after neighborhood for anyone seeking—and willing to pay for—spacious living quarters in an urban setting. Developers have converted many of the original warehouse buildings into luxury condos—including 101 Warren, 200 Chambers, Pearline Soap Lofts and 145 Hudson—and rentals.

The neighborhood’s historic, loft-lined streets are relatively quiet after business hours save the buzz and glow of fine dining establishments, neighborhood bistros and cafes that keep residents’ sophisticated palates happy. Thankfully missing are the frat bars and watering holes that are unavoidable in many of the City’s residential areas. The TriBeCa Film Festival brings cinephiles and industry types from around the globe, and the addition of a 92nd Street Y outpost has given residents and their families a cultural hub. Shopping is plentiful as well, with small shops run by local and international designers and enough drug stores and delis to serve residents in standard Manhattan fashion.

There are no user comments at this time.
+ Add Your Comment

Are you looking to buy, sell or rent an apartment in New York City? Our expertise is Manhattan real estate and we can help you quickly find just what you are looking for.
Search through our database of hundreds of studios, one or two bedroom apartments for rent or sale, luxury furnished NYC apartments, no-fee New York apartments and even open house listings.

Once you’ve found an apartment you are interested in, contact the Anchor Associates licensed real estate agents and allow us to negotiate and manage the sale or rental of your next NYC apartment.

If you prefer, allow our VIP apartment search service find listings tailored to your specific search needs. We’ll do all the legwork for you. We have one of the largest inventories of Manhattan apartments and specialize in working with you to secure your New York apartment rental, sale or corporate relocation.

We look forward to making your apartment search simple and successful!